Hey everyone! I just came back from a long 36-hour CSAW ctf finals competition, competing as dcua.

First of all I would like to explain why this competition is quite a special and unique experience. First of all, this is an on-site competition, as compared to most other online CTFs. Furthermore, this competition is only open to the top 10 teams (of four players) in the entire country; so basically, I am competiting with people who are probably the best people in university. I cannot understate how privileged I was to be able to even compete in this prestigious competition.

I feel privileged that I can compete among good teams such as perfect blue and PPP. I was also able to meet cool people like Rusty Wagner (who designed the Pwn adventure 3: Pwnie Island game) during this competition, and be able to play his newest released game that made a great addition to the pwn adventure series.

Okay, okay, enough of inner little child me exclaiming about meeting famous people... I will also release write-ups for our dcua team in a few days later, stay tuned!

Anyways, this competition itself was a very fun and unique experience, although I was a bit disappointed that there wasn't any cool kernel or KVM related problems (maybe next time). At one point we were in 2nd place (which was pretty cool), but in the end we ended up as 6th place. If we competed in any other region, we would've gotten first easily. 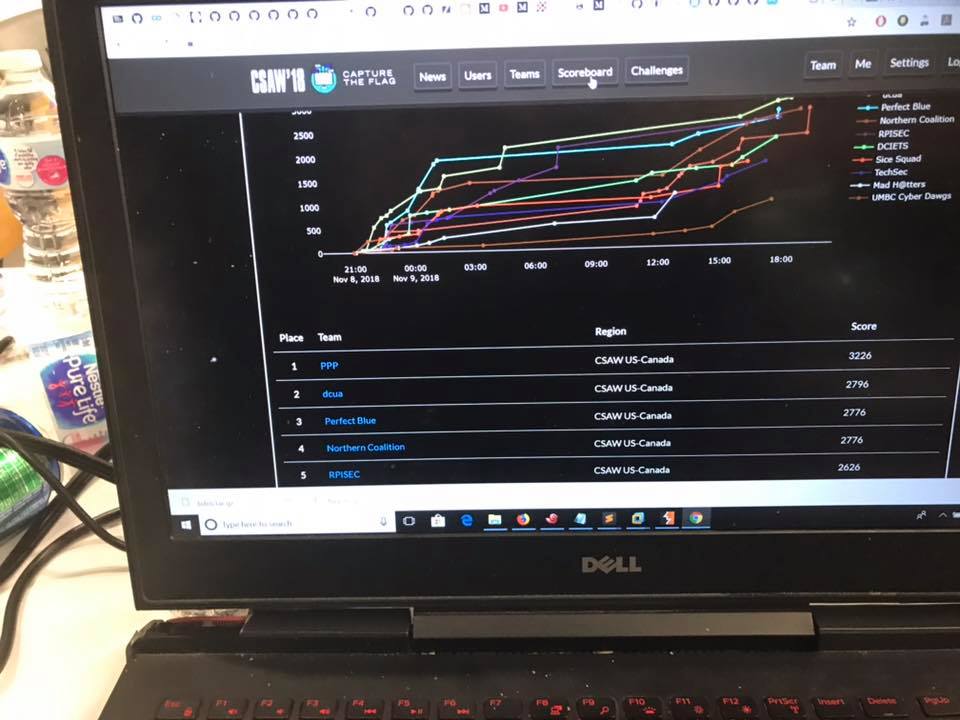 Anyways, as I hinted before, Vector35 (the company that also released both binary ninja and the pwn adventure series) wrote a pretty awesome game called Pwn Adventure: Sourcery. This game was actually quite unlike other previous games that they released. First of all, this was written in Rust, and compiled to Web Assembly (yuck!). I tried to disassemble the web assembly game, but ultimately failed because I don't know enough web assembly, and the game was too big to reverse. What was cool was that I think the game also implements a minimal kernel written in the javascript code to service the web assembly (which was cool). However, in the end, no actual reverse engineering of the web assembly was super necessary. In addition, after asking a team, we found that the flags that were needed for all the problems were actually server-side verified, so hacking the game will not let you get flags (though it may have made the game easier to play).

This was quite a fun experience, and I think in total I slepted about 12 hrs out of the 36 hrs competition (probably a little too much?), and I was quite tilted by multiple pwn adventure problems, sighs... I should've paid closer attention to the details!

Consider this, a team who was 8th place at day-1, 5th place on day-2, 3rd place before the end, instantly won the competition. Either they got their skill-set out at the very last moment... or is this just another fairy tale to cover up something else more sinister hmm...? Of course there shouldn't possibly be the slight concept that somebody is cheating, but you never know...