I competed in TAMUCTF as part of team dcua. Because this was a week long competition, by the end of it, basically many teams tied in terms of score, but we managed to get all the challenges the fastest, so we got first!

This was I think one of the coolest example of having teamwork, as we all contributed to different problems and were much more successful than any of our individual efforts.

I am going to do a few series of writeups for the problems I finished:

The pwns at TAMUctf were pretty easy (except for veggietails and pwn6) so I was able to finish most of them in a few hours :P. There were a few hiccups in how the orgs wrote two of the chals, so there was unintended solutions (oops).

Honestly, this challenge was more of an RE than a pwn challenge I'd say. First order of business, I want to checksec it:

For those of you who never heard of checksec... it is a very cool standalone binary (I think you install it from pwntools) that you can use to check some security settings of a binary.

To my surprise, I noticed this has a couple of interesting security(TM) features that I wouldn't expect from an easy pwn when compiling this binary:

Now one last thing to note, is that there is NO STACK CANARY. This almost always means that we probably have some sort of buffer overflow exploit to do.

Because of these protections and more, we can't easily redirect the return address to whatever address we want. :'(

So I just went and did a bit of reversing to see what it is doing. Turns out, it seems pretty simple. First two questions it is comparing with some hardcoded string. That can easily be found by using strings: ([...] includes some omitted text)

So now we have the third question, which need to find some sort of secret. This requires digging into the assembly a bit. Here's IDA screenshots:

So we see that there is a call to gets which reads from a buffer located at [ebp+var_3B] or [ebp-0x3b]. As mentioned before, because of PIE (and other reasons...), we cannot easily modify the return address to jump to whatever code we want. (sad...)

Now we see a compare with some variable at [ebp+var_10] or [ebp-0x10] with 0xdea110c8. This probably means that we need to overflow this buffer starting at [ebp-0x3b] by filling 0x3b - 0x10 = 0x2b = 43 characters, followed by the value 0xdea110c8. Since we have little endian byte ordering in x86, the lowest bytes will be located before the higher bytes. So our full exploit is something like this:

Also if you have no idea how to start binary exploitation, I recommend looking over liveoverflow's playlist on binary hacking. He starts very basic, and does a good job with explaining basic exploitation stuff (like stack, heap, format bug, etc...) in simple graphics!

So this one if you do checksec, you get similar results as in pwn1. Here we have another gets call (which is still vulnerable!!!). However, this time, the gets function is not really exploitable, so we move on to the select_func function: 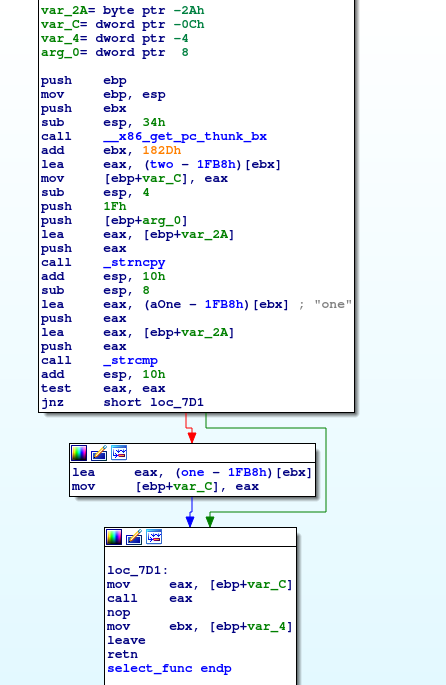 What's interesting here, is we have this strncpy call with the arguments (ebp+var_2A, [ebp+arg_0], 0x1f), which seems pretty fishy because it actually allows us to overwrite ONE byte of the neighboring variable [ebp+var_C]. Furthermore, we see with this code:

It actually preloads this variable with the address to the two function, which is then later called here:

Now you might be asking why then, isn't this printing out This is function two! when we type something other than one? I actually ran this with gdb, and saw this: 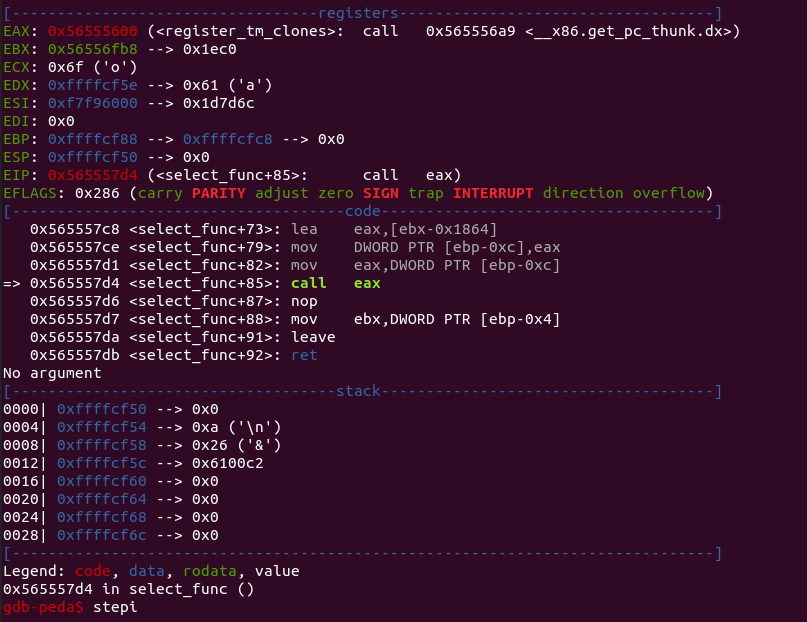 So apparently, a buffer overflow DID occur, apparently, strncpy was actually zeroing out more bytes so that the low byte of that variable will get set to zero regardless! Hmm... so I guess it jumps to somewhere else in code that somehow manages to do nothing bad and not crash!!! Okay that's cool.

Now the final exploit, now the two function is located at 0x6ad according to IDA. Now because of PIE, the top few bits in this address is randomized, but the bottom three hex digits stay the same regardless (because the binary must align on page boundaries). So effectively, I can jump to anywhere AS LONG AS the address has of the form 0x000006XX, which happens to include the print_flag function. Here's my final exploit:

pwn3 was a bit trickier. Let's do another checksec:

Ahh... this time we have some interesting stuff: NX disabled and Has RWX segments. These both mean the same thing: we have areas where we can write and execute code at the same time. This means we have the ability to execute shellcode at this location. Apparantly, the stack was the one that was executable.

Now we just need a leak for the stack address, so that we can set the return address to jump to our stack! Luckily, the binary did that for me!

I had to switch to using pwntools for this one:

And this will give me shell!

Haha these two were broken. pwn4 let you input any length of command, but pwn5 has a restriction to four characters. You can get a shell for both by executing ;sh via command injection. Then you just type cat flag.txt once you get shell... too easy... next!

Okay kids you learned your lesson! ALWAYS check your code twice and run it through a few experienced pwners before actually releasing it for others to break it... especially for large bloated code!!

First I think it would be good if I explained what this program did. Essentially there's a client program that talked to a server program. This server is the one that is located on a VPN connection. BOTH the client and server programs are very vulnerable (Idk if this was intentional), but we need to attack the server only. Also I forgot to mention, the server requires an authentication of username and password before getting access to most of the functions, except we don't have passwords (and it looks like the SQL commands used are not vulnerable).

When you are not logged in, basically, there was very little commands that can be issued, and if that command is invalid, the server will print out a log of that. This will be important, as we see later... Anyways, a side-note is the server does not block one command (create_account) which might be vulnerable to something, but I chose not to look at that for now.

For this one, I had to use a few more heavier tools (including IDA pro and hexrays) to get the decompilation stuff and the structs that are utilized in the program. I think trying to reverse that massive program could be a good exercise, but it was honestly a waste of time for me. So here's the code that is buggy:

Apparently, as mentioned before, the server will check to see if a packet issues a valid or invalid command. If it is invalid, it will print a log message, including this vulnerable printf format bug of the packet data. (seems suspicious).

Essentially, if you pass a %n format to printf, it will actually take that argument (which assumes to be a int pointer), and set it to the number of characters written. If you instead put %hhn, it will assume that you have a char pointer, and the number of character written will wrap around modulus 256. Furthermore, adding a number + dollar sign %5$hhn, it will instead use the 5th argument to write to.

Now the fun comes as we realize that the function that calls process_message (handle_connections) actually has a HUGE buffer allocated to stack. This is actually the same buffer used when reading input from the socket. This means, we have an ability to control values on the stack. Now printf will at some point will extract arguments from the same stack that contains the buffer. This means we can control the addresses of these points, which printf will then use to write the number of characters written to this address! This is very useful, as we can uses this to overwrite GOT entries (they are values that point to functions).

So here's my full exploit code, which overwrite the GOT entry for printf, to system! We get shell, easy money!